When your multinational automotive corporation needs to showcase all three of their class-leading commercial vehicle manufacturers, how do you create a unique and sophisticated experience for each, while retaining the connection with the parent brand?

Our challenge was to grandstand Freightliner, Fuso and Mercedes-Benz at the Brisbane Truck Show. Carving out an innovative and distinctive zone for each of these Daimler Group brands to exhibit huge heavy vehicles and provide experiences that were physical, virtual and auditory – driving awareness around the launch of several game-changing new trucks hitting the market and impressive tech advancement.

The solution was to provide an experience unifying Fuso, Freightliner and Mercedes-Benz under the Daimler master brand.

A multi-brand, cohesive, linking signage across the expansive space served to visually connect the three exhibitors as belonging together.. A professionally recorded truck show radio, broadcast across the whole Daimler space created an auditory link between them.

The 2017 Brisbane Truck Show was all about big players, a big event and big news.

We were working with Daimler: one of the world’s biggest manufacturer of commercial vehicles with a global reach. It was the 50th anniversary of the biennial Brisbane Truck Show – an event attracting nearly 300 exhibitors and 40,000 attendees over four short days. It’s the biggest event of its type in the southern hemisphere, and the premier event in Australia enabling the transport industry to showcase the latest in big trucks, innovation, engineering and technology. And the big news? Mercedes-Benz would be unveiling their next generation, all-new, on-highway rigid range, as well as presenting their newly-introduced prime mover models that saw them take out the show’s highest honour: Best heavy duty truck.

The line-up of Mercedes-Benz’s versatile 4×2, 6×2, 6×4 and 8×4 models had the industry all a flutter pre-show. Banking on this we decided to make the Mercedes space all about uncovering the new jewel in their crown – the New Actros.

Fuso is the Japanese contingent from Daimler. We made sure Fuso stood out with a bespoke virtual reality experience that enabled attendees to immerse themselves in a virtual Fuso world, present and future.

The Freightliner show space was a mid-century workshop like setting, complete with sound effects, in line with their 75th anniversary focus.   Showgoers could then put themselves in the picture by taking part in a green-screen digital photo op. Amplification and shareability were achieved by printing or digitally sharing photos.

Unifying three very different show experiences under the master Daimler brand was achieved with the “Truck Show Radio” – a radio show with ads and a curated soundtrack that played across the whole Daimler space. Ads during the radio show spoke to available finance and after-sales servicing that comes with a purchase from Freightliner, Fuso or Mercedes-Benz – amazing shared services that only Daimler Group truck buyers benefit from. 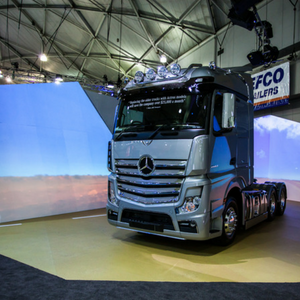 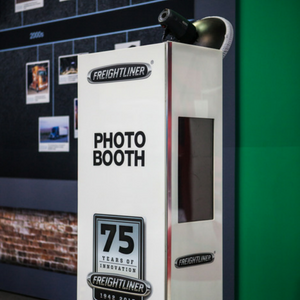 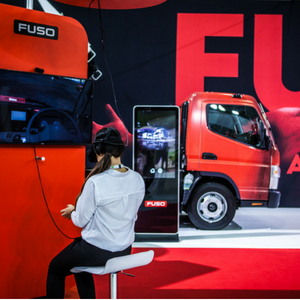 Fuso VR experince enabled people to build their virtual truck for today and explore trucks of the future.

We look forward to helping you tell your brand story.