Amplified UAE temporary structure where the sky’s the limit

How do you connect your high-value with clients with your aerospace, security, aviation and defense capabilities without squeezing them into a cockpit or boring them with blueprints?

Our challenge was to design a  flash retail and operations space to bring Leonardo’s lofty, high-tech experience down to earth, demonstrate their social connectivity and inspire current and new business partners to shoot for the stars.

A complex, multi-storey structure for Leonardo to do business with their clients in, while remaining connected to the spectacle outside and overhead. While temporary in nature, it was important that the intricate custom construction showcase elements of Leonardo’s expertise in an integrated, seamless, innovative and relevant way.

For most of the year Dubai sits somewhere in the 30-40 degree celsius range. And a searing sun paired with a hot tarmac are more likely to see your customers running for cover than inspiring them to cooly consider your next joint-venture. That’s why we created an imposing indoor and outdoor oasis, fit for business deals and wide-eyed admirers, in the middle of the Dubai Airshow.

We were catering for two very different and distinct audiences with our grandiose, made-to-measure structure – because it’s not just high-end, Armani-clad clients who frequent airshows. Aviation enthusiasts also enjoy the thrill of getting up-close to aircraft and flight-related kit, and marvelling at aerobatic displays that defy gravity and belief.

We designed and built a 450 square metre, double story ‘flash’ space (pop-up and temporary in nature, but able to be dismantled and then rebuilt for later use). On the inside; five meeting rooms, three bathrooms, an office and two kitchens (including hospitality prep space). A bar, lounge and VIP dining completed the indoor space. Our showpiece? And a grand outdoor bar and aircraft viewing deck connecting the formal, high-spec interior and its aviation moguls with the activity outside. The entrance to the huge outdoor aircraft display doubled as a large video wall used to broadcast aggregated real-time airshow happenings via social media.

Leonardo were so delighted with the result, they requested the structure be deconstructed, preserved and stored to be reused at later a date. 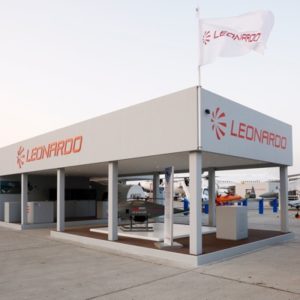 Structure to be stored for
reuse at Dubai Airshow 2019 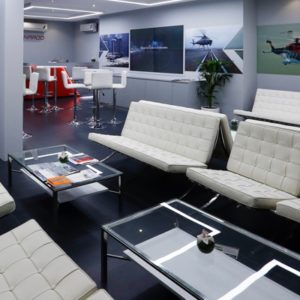 Viewing terrace, lounge and bar became a focal point of the event

We look forward to helping you tell your brand story.